Bharatpur Bird Sanctuary is now known as Keoladeo National Park. The 29 square km park’s woods and man-made wetlands protect over 350 species of migratory and resident birds, including herons, cormorants and eagles.  It is also a World Heritage Site.

During the month of October, when this video was made, the resident birds are breeding. November onwards, the migratory birds start arriving.

Flyway, it is a staging / wintering ground for a large number of migratory waterfowls. The rare Siberian cranes used to winter in this park but this central population is now extinct. The last Siberian Crane was seen here in 2002.

The sanctuary was created 250 years ago and is named after a Keoladeo (Shiva) temple within its boundaries. The park was a hunting ground for the Maharajas of Bharatpur, a tradition dating back to 1850, and duck shoots were organised yearly in honour of the British viceroys.

Watch this film at 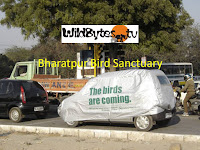