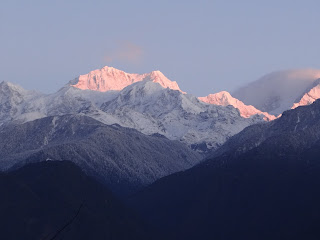 Any write-up on Sikkim would be incomplete if we do not cover Mount Kanchenjunga, the all pervasive mountain range which oversees Sikkim.

Kangchenjunga was first climbed on 25 May 1955 by Joe Brown and George Band, who were part of a British expedition. They stopped short of the summit in accordance with the promise given to the Chogyal(erstwhile rulers of Sikkim) that the top of the mountain would remain intact. Every climber or climbing group that has reached the summit has followed this tradition of stopping short by 10 feet.

Kanchenjunga translated means “The Five Treasures of Snows”, as it contains five peaks, four of them over 8,450 metres.

Sikkimese worship Mt Kanchenjunga as their guardian deity. It is believed that the ‘mountain god’ played an active role in introducing Buddhism into this former kingdom.