Forum > Eco-tour > Walking in the fields of Kangra

I was in Kangra (Himachal Pradesh) late October, just before winter set in. As always, the countryside is ever changing and never fails to reveal something new for my camera to capture. The mongoose family scurrying about the neighbour’s vegetable fields was amusing.

So was the sight of giant wood spiders alongside walking paths. The females are nearly ten times larger than the males, I believe. They weave the strongest and largest spiderwebs known to us. Shiny legs with yellow joints are their hallmark. Giant wood spiders are the subject of research- Humans would love to know the secret of creating the strong golden websilk. "In modern times, the Golden Orb Web Spider’s silk is set to become a major product. The silk is almost as strong as Kevlar, the strongest man-made material which is drawn from concentrated sulphuric acid. In contrast, spider silk is drawn from water. If we could manufacture spider silk, it would have a million uses from parachutes, bullet-proof vests, lightweight clothing, seatbelts, light but strong ropes, as sutures in operations, artificial tendons and ligaments. Studies are now being done to have genetically engineered plants produce fluid polymers which can be processed into silk".

The wild red and white berries were all over. 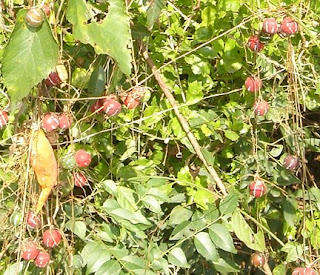 The fields had spawned metallic mushrooms which vied with the pebbles lying around. 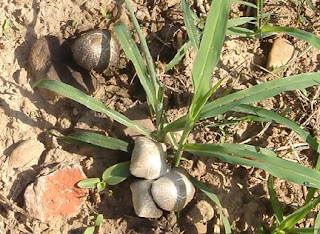 My husband was only too pleased to pose for a photo, framing a wagtail which he was pointing out to me! 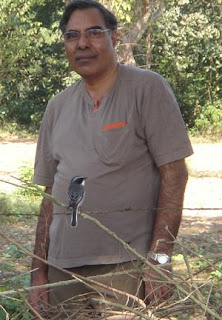 More on my next visit!