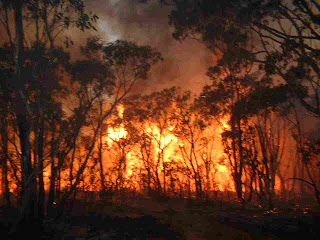 The first learning during my stay at Bandipur during the 3rd week of March was Forest Fires. I was under the impression  that Forest fires were caused mainly due to dry boughs rubbing  against each other (taking into consideration a large amount of  dry dead leaves littering the forest floor) , due to  lightning during storms and sometimes by man. I was in for a  rude shock when I came to know that all forest fires in India  were caused by Man!

We are so much influenced by American way of life through the  medium of television, that we know a lot more about their wildlife  than our native species, we know the emu and the ostrich than  the Bustard, we know about the cougar more than we know about  our panthers, we know a lot more about African elephants than  about their Asian cousins and so also I was under the impression  about forest fires through natural causes through the widely  televised events shown in TVs about the fires in US.

Indian forests are mostly deciduous type . Even  during the driest season they contain enough moisture to rule  out fire due to natural causes. Unfortunately the same cannot be  told about the invasive species -lantana, eucalyptus and the Australian wattle which the government has planted everywhere to  suck out the underground water, to wipe out the native species  and thus deny the herbivores that depend on them for food, and  hence to go extinction ( the introduced species neither provide  good shelter nor do they provide fodder) and to support fire to  spread easily  (these trees are so dry and the leaves litter do  not decompose fast and contain oil thus encouraging fire). Of  course that wasn't their idea, their logic seemed to simply rotate  around the fast growing nature of these trees. How could the  govt without a scientific analysis on the impact from these  trees to the native environment do mass planting everywhere ? why  do they still continue doing so even after the impact is so  visible and screamed out loud by the scientific community?

Our forests are fragile. Every successive fires caused  accidentally or deliberately by people living within and the  fringes of the forest areas inadvertently causes irreversible  damages to the ecosystem. Fires bring down century old trees  that are destroyed beyond repair and encourage rampant lantana  growth in the successive rainy season. Not to mention the  animals that perish in the fires. Bandipur this Summer saw fires  breaking out all around. The concerned forest authorities were  helpless. They lack resources to control and prevent fires. They  lack man-power and motivation. True they don't take steps to  secure but dare I point at them? Isn't it true that the number  of forest watchers and guards are at their record low? That  there haven been any new permanent posting, the govt happy to  appoint guards on contract basis and pay them poorly.

So, what is the solution? Encourage forestation with native  species. Check the growth of lantanas. Educate the tribal and  villages encircling the forests about the menace of forest fires  and steps they must take to prevent accidental fires. Educate  tourists on the same lines. Post more guards and watchers. Raise  their salaries to the level of hawaldars in the civil dept.  Provide them with equipments to control fire in case of forest  fires. Its a big task ahead of us. Educating the masses ,  mobilizing them to protect this rare treasure that's in our  hands.

Thank you Aparna for posting those informative blogs!

most of the forest fires are caused by the human activities , as i also witnessed in a village near jammu , three wild goats got stranded at a small patch facing fire and having chenab river behind them flowing with full throttle ,, i just waited and watched then completely helpless more than those goats , as what would be their next step , after half an hour , one of them jumped leading the others , that was very dysphoric,