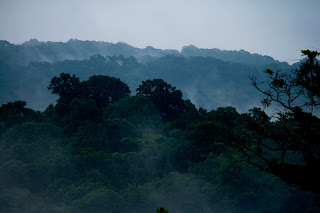 Sunlight penetrates in tiny patches just enough to give the seeds a chance  to sprout but not to grow, creepers as thick as my waist having spiraled  round its victim tree, blooms on touching the sunlight, on the canopy above and  gripping its victim more securely into a death embrace. Birds whose whistling and cacophony  keeps your neck stretched backwards drives you mad with the impossibility of  sighting them within the lush green layer or rather floors of leaves. Welcome  to the Evergreen forests of Sharavathi Wildlife Sanctuary!

The sanctuary covers the Sharavathi Valley Region, near the western border of  Karnataka. It is spread over an area of 431 Kms and is nourished by the  Sharavathi River.

Me, Guru and Ananth visited this amazing secret world one weekend. A rather  bumpy ride that almost broke our backs, being unfortunate to get the last 3 seats on the KSRTC bus, headed towards Linganamakki, left a red eyed tousled  trio embark at Kargal that is around 5kms from Jog. Gangadhar, our guide who had  arranged our stay, collected us and dropped us at Kanooru, a tiny village with  hardly 8-10 families. Being enthusiast Birders and wary of wild crowds from  Bangalore we kept away from the main group to explore the Kanooru forests.

Filling up with the idlis we filed out into  the jungle. Having been cautioned with many a thrilling tale of leeches, I  fell into a state of anxiety, this being my very first experience of leeches.  I almost had exaggerated them into centipede sizes swarming all over, biting  into you and slowly leaking out your blood, while you howl with pain. (I know  I was reading too much into horror movies!).

I was laughed at my attempts to wear the shoes and socks and a tucked in cargo's into my ankle length army shoes, nothing could possibly prevent the  crawlies! Well I had my last laugh! Take my advise, Ankle length shoes with  the ends of your pants tucked into them does protect you from leech bites! So  I can safely say not even a single one could feast on my blood! 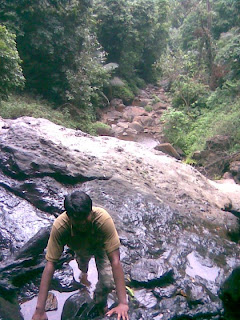 Dharma, our guide took us along a path that steadily went down until it opened  up into the stream that eventually joins Sharavathi. Having had enough of  leeches we (read Guru and Ananth :)) decided its safer to trek along the  stream. The most arduous length was when we has to climb up a vertical cliff  to get to the other side, our nimble guide swung himself up and helped us all. Ananth had a hard time climbing up ;).

The guys while  engaged in a luxurious river bath and our guide prepared fire to cook our  lunch  I went to explore upstream and catch some nap.

One of the many irritating thing about being a gal and that too a gal  engaged in wildlife conservation is that not only your team thinks twice  before taking you along and take manifold precautions and planning before  they embark on the trip, that can generally dampen the whole wild experience,  but it also means you cannot participate in things like jumping into the  river and swim wild like monkey. :( . 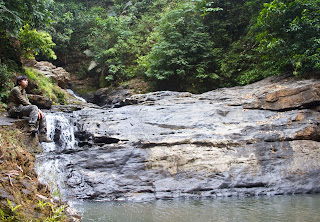 Anyway the time I spent upstream, was one of the highlights of my trip, it  gave me some time on my own to soak in the beauty of that place. A constantly  tumbling water in the stream. An eerie silence of no-activity that sometimes  is interrupted by a flutter of wings and sometimes a distant call of some  unknown bird. The dance of the light on the water splashing sliver of silvery  ribbons. Some wonderfully coloured butterflies and beetles hovering over the  stream lazily. A scene of content and perfect solitude.

On a glance it might seem that the Sharavathi Valley is devoid of wildlife,  that's just an illusion. The denizens of these forests above all prefer to come out during the times the sun is down. And being there at dawn or dusk still does not increase your chances of catching a glimpse of these shy creatures,  they possess another weapon - camouflage not to mention the dense foliage  that completely renders them invisible to an untrained eye. The sanctuary is  a refuge of the endangered Lion-tailed macaque. Other mammals include tiger,  leopard (black panther), wild dog, jackal, sloth bear, spotted deer, sambar,  barking deer, mouse deer, wild pig, common langur, bonnet macaque, Malabar  giant squirrel, giant flying squirrel, porcupine, otter and pangolin.

Reptiles include king cobra, python, rat snake, crocodile and monitor lizard. Some of the avian species found in the sanctuary include three species of  hornbill, paradise flycatcher,fairy blue bird, malabar whistling thrush,  blue-throated barbet and Indian lories and lorikeets. There are many  butterflies in the sanctuary. 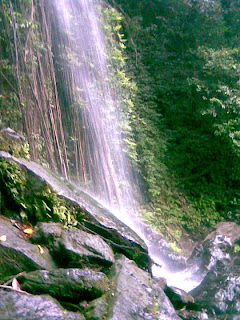 Amidst growing concerns by Dharmanna that we might not be able to leave the  forests before dusk, Guru pointed out to the little and only torch we had amidst us and said we will bank on it. How could we hurry? when at every turn the scene grew more beautiful than the previous and dusk brought home, birds near stream and gave us the opportunity to see them. The last mile brought us to a lovely waterfall. This time again the guys had the time of their lives splashing around the fall and faithfully reminding me what a unique experience I have missed.  During this time I discovered to my dismay that mosquitoes are not the only  insects that syringe you for your blood! There are insects that are much  larger with much bigger stingers!

Night brought ten thousand fire-flies! OK some hundreds then.. All good-naturedly blinking from the trees surrounding the house, And as we fell asleep on the porch chatting about this and that I fell into a deep sleep  wondering why the fire-flies have abandoned us at cities as everything else that was a part of our childhood , like the multitude of butterflies and  sparrows, the little beauties of nature.

The next morning after waiting for Gangadhar who was to be our guide for the day, for quite a while we decided to do with our little buddy Yogaraj.  Trekking on the outskirts of the forest we came across this one particular  tree that seem to have attracted a lot of our avian friends, I saw my first  fairy blue bird. We decided to spend our morning on the roof of the fall to  which my friends seemed to very partial and indeed it was worth all the admiration. A clear view of the valley below sheltered by a fruiting tree on  whose many branches housed several other creepers like a curtain to this  awesome world. Some where down a Malabar whistling thrush was on with its singing routine, I could just imagine him going up and down his favourite tree  whistling away to lure his lady love. You have to hear one at its performance and feel one's heart fill with joy as it goes on. You could  easily mistake him to be some amateur boy whistling away in the forests, not  without reason the Malabar whistling thrush is also called whistling school  boy! 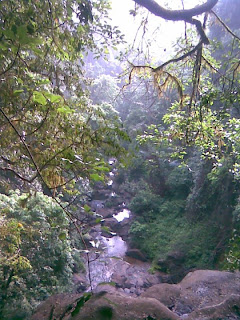 After a long time of resting in that blessed place we returned back for a  round of breakfast. We soon again crashed into the forests, this time journeying through the open fields to visit the hornbill's nest. A hornbill has a very curious behavior about nesting. It nests in the tree holes. During  the time the female hornbill has to lay egg she sheds her feathers (pulls it out on her own!) and makes herself comfortable in the tree hole her mate has  found and which she has approved and then shuts herself in by sealing the hole with mud and grit, leaving just a tiny slit through which the male regularly drops in food.

We spent a major part of our afternoon next to a natural swimming pool, with the guys again splashing and posing and exploring upstream around while I spent  time sleeping and listening to music. Just to keep Yoga from getting bored I  challenged him on who could keep their head-down-first into water for long. Needless to say he won ! The way back was quite a bit of journey, crossing  the deep pool over a fallen tree trunk, I did that one on all hands and legs!  jumping over rocks to keep my shoes dry which I gave up on the last stretch  jumping into the pool thenceforth at every opportunity..

As we trekked back Ananth kept our lungs tickling endlessly by slipping over  the dry and wet rocks alike in spectacular fashion. Yoga kept his eyes  tuned on him just so he woudn miss the next one coming. So much for the  really costly woodland shoes and the really cheap hawaii chappals that he alternated between! My favourite one was the last fall when while wading  across the knee length water he fell on his *** with his camera and binocs  held high above his head with a very surprised look on his face! Wish I had a  snap of that! This much I must say to his credit, he took all the jokes aimed  at him good-naturedly :). 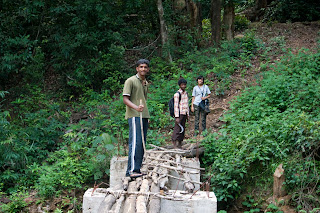 The last of our adventure in the Kanooru forest winded up on a half done bridge over a stream that was hardly a trickle that summer afternoon.

After a hasty lunch we returned back to Kargal on an auto whose driver  insisted us on showing the secret submerged tunnel that opened up into Linganmakki. For me it was the thrill of seeing the swallows mud house  underneath the bridge that made the detour worthwhile. 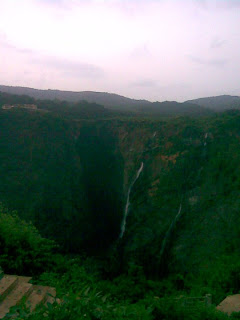 With a lot of time to kill before the return bus to Bangalore from Sagar at 10pm we had a pit stop at Jog Falls. Despite the disappointment of the front  view wiped clean of all trees by a concrete corridor giving a naked fall, The Jog falls by itself is still is a marvel and a beauty to behold. A vertical drop of nearly 900 ft Jog Falls still remains a spectacular sight with multitude of  swifts hovering around it. As we three sat there looking at it for a real  long time I felt a sense of companionship, like some perfect understanding  passed between us unspoken about what lay ahead of us. A commitment to do everything possible to protect the forests of this land. Although I speak  here for myself  I am sure we all are of the same opinion.

Looking for the deluxe cottages in mukteshwar Nainital and apartments in Nainital. Contact Indus Valley Mukteshwar