Forum > Insects > A walk along the banks of Ulsoor Lake, Bangalore

I watch with interest the large number of morning walkers on the walking path so well carved out along the cleaned part of the Ulsoor lake.  Some are engaged in conversation, most glued to the earphone, some exercising, some playing ball in a clear strip.   Cormorants splash around in the clean part of the lake, obviously there are fish in the water.   Their splashes arouse the curiosity of walkers who are new to the area.  Mobile phones go clicking.   Pariah kites circle around.  A single Brahminy kite stands out.  The number of Brahminy kites seems to have gone down.  I could spot only one in about ten days' time. This blog is for all of those who do not have time/inclination to watch the lovely butterflies and other insects they pass by every day.  These insects are becoming rarer by the day and we in India are lucky that spraying of insecticides is not that widespread yet so as to kill them off for ever from our parts. Safety tests done in labs before marketing insecticides don't account for the long term poison accumulation that kills bees, and possibly many other beneficial insects.   By disregarding the threat of chemicals to tiny creatures, scientists warn, may be endangering larger ones like ourselves.  I call them Gems, because they are priceless in today's world.  Here are a few I could manage clicking. 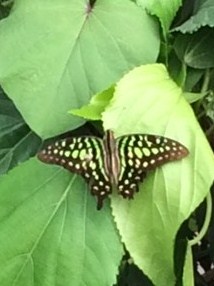 
To read more about this butterfly, go to http://www.ifoundbutterflies.org/sp/569/Graphium-agamemnon 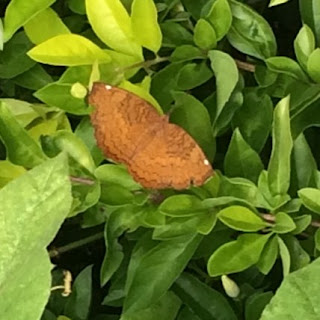 
To read more about this butterfly, go to http://www.ifoundbutterflies.org/#!/sp/765/Ariadne-merione 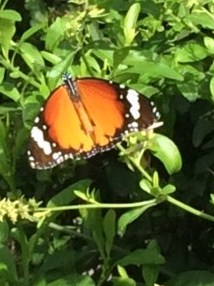 
To read more about this butterfly, go to http://www.ifoundbutterflies.org/#!/sp/744/Danaus-chrysippus 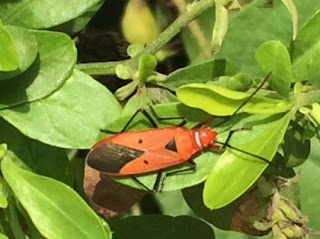 
And now,  the Glaring Gaps of the Lake! To reach the walking path I had to walk along a stinking sewer which borders the Lake for almost 1000 meters.   Sewage water kept spewing in from other parts of the lake as well. 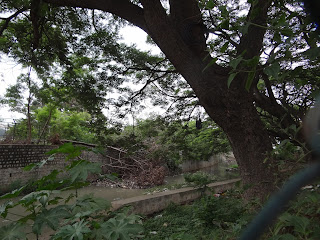 The stinking sewer whose water goes into the lake 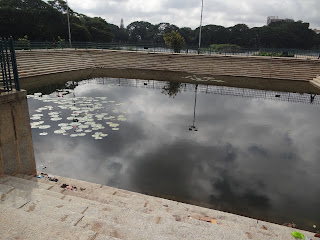 The pretty water Lilies blooming in the enclosed part of the lake did not prevent the steps of the step well getting strewn about with polythene bags and styrofoam glasses.   (Double click on the picture to see a larger image) Marketed in the US under the name Styrofoam, EPS Expandable Polystyrene Foam (EPS) was invented by Dow Chemical scientist Otis Ray McIntire in 1941.  There are two main issues that polystyrene causes for marine (read lake) animals - mechanical and chemical. "The [mechanical root] is very straight-forward," says scientists.   Oftentimes, we find polystyrene foam lodged in the intestines that causes blockages that can be lethal. If you think about how we worry about a mild blockage from eating the wrong thing, imagine eating a ball of Styrofoam. That's what some of these animals are doing." Chemically, absorbent properties make EPS even more dangerous. "Polystyrene foams essentially act like little pollutant sponges, picking up and concentrating some of the nastiest contaminants in the water"   That's not just bad for the fish and the cormorants. It could be bad for humans. My earlier article on Ulsoor lake "Bringing back nature into the city of Bangalore" can be read at the link http://www.indianwildlifeclub.com/ezine/view/details.aspx?aid=830
Share this post:

Bangalore lakes can be saved if all the sewerage water which flow into them is first treated before allowing to flow into lakes.
Throwing garbage into the lake by citizens must be heavily fined.

A comparison between Jakkur lake and Bellandur is shown in the video link below. Jakkur has clean water, Bellandur does not.